Today was the day!!! Mr. Sam finally got taken off his ventilator. I’ve been waiting to do another post until this day, and we are so excited he’s able to breathe on his own again! For the past few days, he has been breathing on his own, but the doctors wanted to wait a few days until they were 100% confident he would be able to once he was off the vent and his lungs were strong enough. Every yellow line that you see on the picture below is Sam breathing on his own. 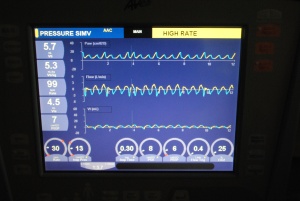 The little guy is such a fighter. We are so proud of him and so happy this day has come. He’s currently on “high-flow” oxygen just to assist him in the next few days; hopefully after that, he will just be put on regular oxygen and then be able to get rid of the oxygen for good!

We were able to hold Sam when he was on the vent, which was pretty emotional. He is such a cuddlebug and the minute he is held instantly calms down.

Sam had another follow-up ultrasound and EEG a few days ago and we are happy to report that there is much less debris in his ventricles and the neurologist continues to believe Sam’s “seizures” were attributed to his meningitis and that he still has excellent brain waves. As terrible as this infection is, we are so thankful that there will be no long-term effects.

We don’t want to forget about Jack. He’s doing great! Jack is our little squirmer… In fact, while I was holding Sam last night, Adam and I watched Jack fight to get out of his swaddle for a good 20 minutes. The nurses swaddle the babies so there is “no chance” of coming out of them [babies are supposed to want to be contained. Jack… is a naughty boy! 🙂 ] Out popped one leg, a minute or two later the second leg, and after a while the boy was free! We caught him in the act again tonight… he squirmed out of the swaddle and down the bed.

In other exciting news, Adam’s grandpa Lester and his wife Corrine passed through Omaha on their way to Arizona yesterday and were able to meet the boys! 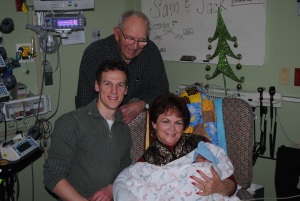 And tonight Adam’s parents got into town and saw the boys again. Grandma Peggy was able to hold Jack for the 1st time!