In the last two days, we received horrible news, and then some very good news!

About 3a.m. Wednesday morning, I received a phone call from Sam’s nurse practitioner. Apparently, Sam had just had a seizure. They called his doctor at home, and Dr. Grebe ordered a spinal tap, as he was concerned the GBS was actually meningitis. Even though his cultures had been negative for meningitis, the seizure was consistent with the diagnosis. I had to give my consent for them to do a spinal tap (again). Let’s just say neither Adam nor I got a good amount of sleep after that call.

We went in pretty early to see the boys and were told that Sam had had another seizure around 8a.m. Dr. Grebe ordered an ultrasound of Sam’s brain. Well…it wasn’t the greatest. There is debris in Sam’s brain ventricles. Again, this is consistent with meningitis. What had Dr. Grebe worried (and Adam…I am happy I’m not in the medical field) is that the infection causing the debris could have possibly spread to his actual brain, and not just the ventricles. Obviously, this would mean Sam could be at risk for neurological/developmental problems in the future. Thus, Dr. Grebe ordered an MRI of Sam’s brain as the MRI would tell us much more.

Sam had the MRI last night, and we got the results this morning. GREAT news! The infection has not spread to his cells. WHEW!!! In addition, Dr. Grebe wanted to confirm whether or not Sam’s “seizures” were indeed seizures. Preemies are much more jerky than other newborns because their neurological systems aren’t completely developed yet. Adam and I told our nurses that Sam has always been a very jerky baby, and so is Jack. We often joked about it! This morning, Adam and I actually witnessed what the nurses believed to be seizures, and neither Adam nor I thought he was doing anything strange. Basically, he would wake up and just looked pissed off that he has a tube down his throat and get scared!

Right now, our #1 concern is getting Sam over his infection. His labs have been improving, so it looks like he has ‘turned the corner.’ Then, obviously, we want him off the ventilator. Small steps.

Here are some adorable pictures we took tonight! Nurse Mackenzie saw their stockings and had a brilliant idea for a photo shoot….:o) 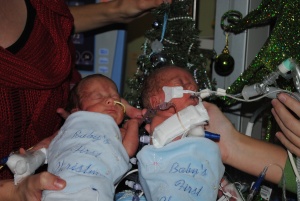 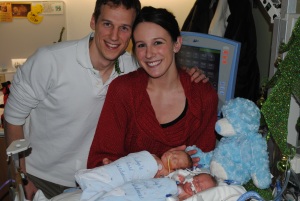