Potty training a kid that has Sensory Processing Disorder, amongst other things going on, has been a challenge. And that is putting it MILDLY.

Two Thursday’s ago, I met my dad in Brookings, SD and dropped off Jack and Eli. Off Sam and I went, ready for the weekend and trying to get him excited about his Mickey Mouse underwear. I should have known the weekend was going to be a struggle when he vomited all over the car after I tube fed him… Thursday evening he had a low grade fever (101*), but Adam and I were determined to still go through with the plans, as long as he didn’t get any sicker.

Friday morning he was fine, and we started the potty training! Long story short– Sam cried so hard he vomited three times (probably a combo of having a touch of a GI bug, but no more fever). He didn’t mind sitting on the potty, didn’t mind wearing underwear, but the actual act of peeing on the potty sent him over the edge. Every time he started going, he just sobbed and shook, absolutely terrified of what his body was doing. This poor child… Mom about quit that night. Thank goodness for Dad! Friday night he had successfully peed in the potty 3-4 times, but each time absolutely sobbed.

Saturday morning went better then expected. He woke up shouting “I go potty!” he started to communicate with us (not really saying “potty”, more like yelling “Ahh! Ahh!” and then we would see him start going in his underwear). After setting him on the potty in his underwear to complete the deed, I realized he didn’t get as scared– so the rest of the day we had him sit on the potty with his underwear on. Every time he went, he still got scared, but wasn’t petrified.

Sunday wasn’t terrible– Sam was even telling us he had to go potty, but usually he had already started peeing. I think he made it to the potty once or twice that day, but it took a good 20-25 minutes of sitting with him before he actually relaxed enough to go.

Here’s where we’re at now, a week later: He is getting better about telling us he has to go potty. We’ve gotten the underwear off, but either Adam or I are in charge of “holding it down.” <– potty training boys sucks. He’s still scared when he pees, but doesn’t cry anymore. Every time he goes potty he is so, so excited. At home, we wear only underwear (diapers at nap and bedtime). In public we still wear diapers. Sam is an incredibly hydrated boy (yay for tube feedings…), and the max he can hold his bladder is about two hours. Also, I can’t imagine his teachers dealing with this at school. Obviously this goes against any potty training method out there, but I highly doubt there is a potty training book called “Potty Train Your Tube Fed Child with Sensory Issues.”

Sam has also figured out that he can now use the potty as an excuse not to eat. That has been an incredible challenge. We are working on balancing this all out, and making sure he tries to go potty before every meal. Also, it’s a good 15-20 minute process from the time he tells us he has to go potty to when he actually does the deed. There’s a lot of rocking back and forth, standing up and getting new books to read while on the potty, and then FINALLY he goes.

Here’s what an average night or day has looked like around here (usually just me since Adam works 134 hours a week): I sit with Sam on the floor of the bathroom while Jack is either sitting with us or yelling about something in the other room. Eli is pissed because he’s not getting 98% of the attention and throwing stuff into his crib or yelling at me in the other room– Eli will eventually make his way into the bathroom where he spends the entire time climbing onto the toilet, attempting to open the toilet, throw stuff into the bathtub, and at some point climbs into the bathtub (one night I didn’t even realize it until he started throwing bath toys at me). So it’s been a super fun experience 😉

I am so incredibly proud of Sam. We knew this wasn’t going to be easy (nothing ever is with him), but he is getting it. Slow and steady wins the race, and this stubborn little boy is reminding us of this again and again. 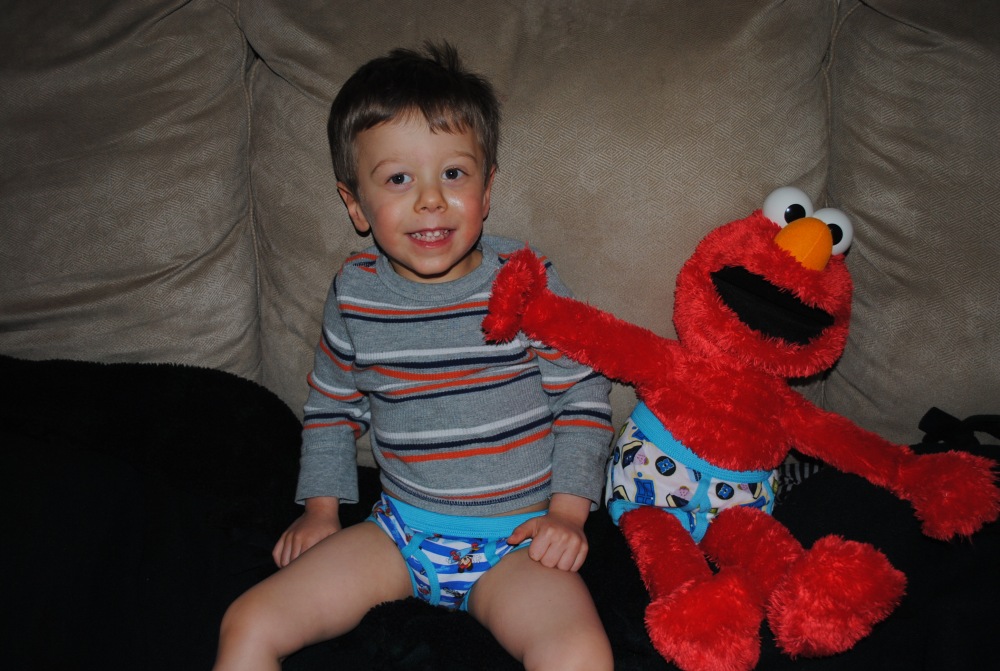