Quick update for everyone… Sam got to come home Tuesday night! Only to have to go back to the hospital next Monday. But we’ll take what we can get!

Basically, an MRI showed a golfball-sized cyst in his brain. This is a result of his battle with meningitis… The doctor is also convinced there are several other small cysts in his brain. Therefore, he will go in on Monday and slice the large cyst in half, allow it to drain via Sam’s shunt, break up the other small cysts he finds, and cut around his shunt to get it back in the correct spot. Because of the size of the cyst, it’s compromising Sam’s shunt. Not a malfunction at least. Suck, suck, and more suck.

While the neurosurgeon is working, the pediatric general surgeon will be repairing an inguinal hernia on the little man, along with finally getting him circumcised. 3 surgeries in 1! Yay! <–sense the sarcasm. At least this means he will only have to be put under anesthesia once.

We’re also seeing a large team of specialists to figure out what the heck is going on with his eating. He had an Upper GI test today to see if there are any structural abnormalities (there aren’t), and also another feeding evaluation. The swallow study is going to wait until next week when he’s back in the hospital. They want to see if the operation will help his eating at all.

So here we are. The StibbeFam is all together again under one roof. Plus a Grandpa Oyos 🙂

Here are their 5-month pictures!!! 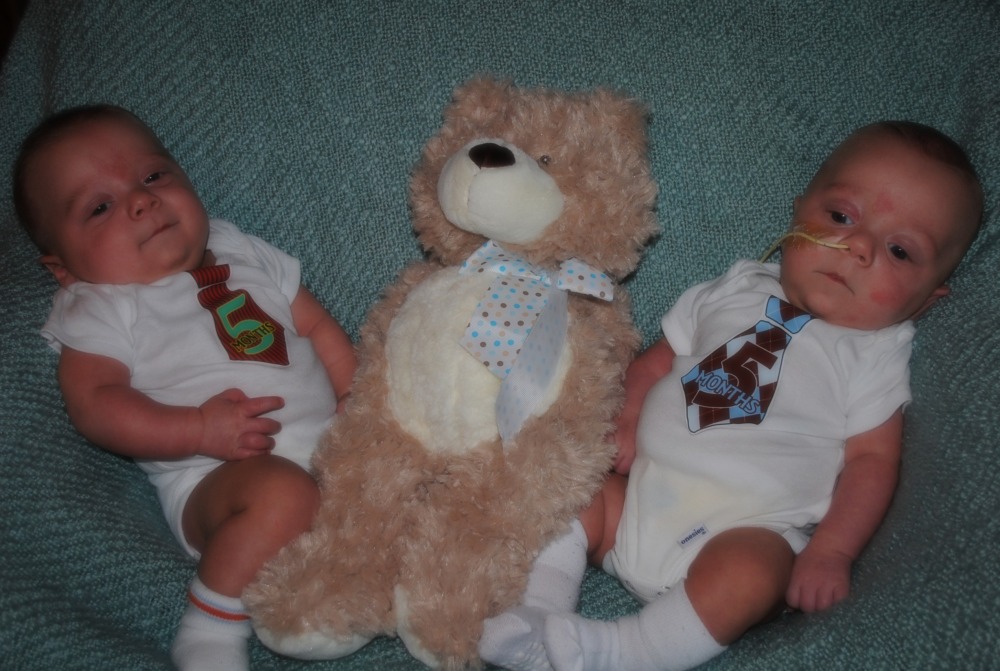